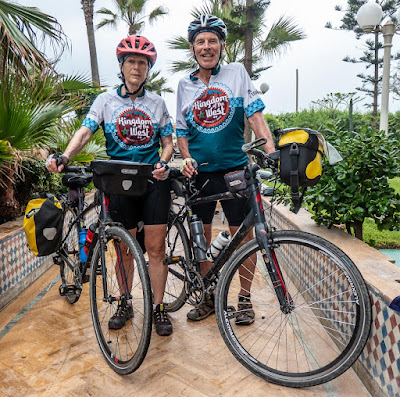 Thursday May 12 - 2700 km of cycling behind us and we return to Casablanca where e started five weeks ago... The previous rest day was in Essaouira, a fishing port city built and fortified in its present form in the the 18th century. It was Morocco's major port through the 19th century.     We had to navigate the narrow alleys of the medina to get to the hotel - happily the support crews handled the baggage that had to come in on hand carts Reverse the process Tuesday morning, assemble outside the old city wall, pump up the tires, fill water bottles, and start the final three days of riding with a 120 km ride followed by two 70 km days. Some very bleak scenery at times, some fields of stone and some very parched-looking stretches but on the whole a reasonable amount of well-tended agricultural land. One very foggy start of the day, with stone-walled fields either side... And then cows taking advantage of the ornate community fountain... The final night and our tent which has served
1 comment
Read more

Six Days on the Saddle 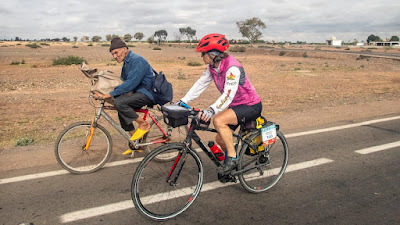 May 3-8... six successive days of riding the bikes and crawling in and out of tents each night. Out of Marrakech initially along agricultural land and local people on their bikes... We're quickly back into the Atlas mountains. Ramadan is over and local cycling clubs were out en masse on training rides. It is going to be a tough week. Campsites were spartan. The first night at the partly restored remains of the 12th century Tinmel Mosque. Later on a hilltop. A hot windy climb to camp... a bush camp with no facilities... ...but payoff was a downhill start the next day... Did I say hills? Yes... lots of hills scattered over these six days... ...and a variety of scenery... Paradise Valley, not to be confused with the Paradise Valley near Squamish... coffee served while feet are in the water getting nibbled on by the fish in the river... well, that's the theory but not many fish in there today and none biting... We cross a dam that is quite low on water going into the summer. ...th
1 comment
Read more
More posts

Ursi and Rae
• Rae - retired test pilot, accident investigator, and other things aviation • Ursula - retired IT/analyst/Database Administrator • Biking is easier on the hips and knees than some other things, and we've found it a good way to get up close and explore new (for us) parts of the world.